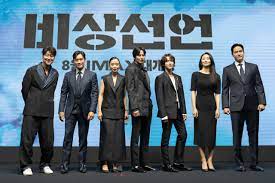 Internationally heading for the United States while looking into a terrorism threat that becomes viral online. Panic breaks out both in flight and on the ground when a strong passenger on the same trip suddenly suffers a horrifying death of unknown reason.

The captain and crew will be compelled to take unusual emergency measures to preserve the lives of their passengers due to the plane\’s continuously diminishing fuel supply and the refusal of the international community to assist.

Evie, who has lost her mother and has no other known relatives, gets a DNA test and learns she has a long-lost cousin.

When she accepts an invitation from her new family to attend a fairytale wedding in the English countryside, the sexy aristocrat host initially seduces her, but she soon finds herself in a survival nightmare as she learns about the dark secrets of her family\’s past and the sinister motivations behind their extravagant kindness.

When Drea\’s tape is leaked to the entire school, it appears that it was done by her boyfriend and head of the school, Max. Drea is at the height of her high school powers and the campus\’ Alpha it-girl (Austin Abrams).

Carissa and Eleanor are the awkward new transfer students. Eleanor, who was bullied by Carissa in summer camp when they were 13 years old, is now forced to attend school with Carissa. Following a covert encounter at tennis camp, Drea and Eleanor forge a close connection to take revenge on their respective tormentors.