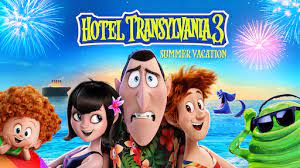 This is a film that was released on January 14, 2022. Derek Drymon and Jennifer Kluska directed it.
1hr27mins of running time
Animation, comedy, family, and fantasy are some of the genres represented.

The film began with a montage. Dracula and Mavis from more than a century ago, when the court was just starting to build an open hotel in Transylvania. In the present, Johnny organizes a celebration for the hotel\’s 125th anniversary. Drac, on the other hand, finds the display too much for him, and things begin to get chaotic when the other monsters join in for a show. Drac uses his powers to freeze everyone and make things his way.
Mavis says that johnny did his best to impress Dracula but Dracula asks her if there is nothing she could about johnny and mavis says no because she thinks he is perfect the way he is.
Drac takes a breather outside and is joined by Erica, she brings up draxon\’s pending retirement which mavis overhears since she has supersonic hearing. Drac is indeed planning to pass down the hotel to mavis and johnny but he is in doubt about johnny’s capabilities to handle the hotel. Mavis becomes excited and spills the beans to johnny who becomes as twice excited. Johnny finds Dracula backstage as he is planning to get ready to announce his retirement and pass down the hotel to mavis and johnny but when johnny comes in, and starts talking about his ideas Dracula panics and lies to him saying that due to..