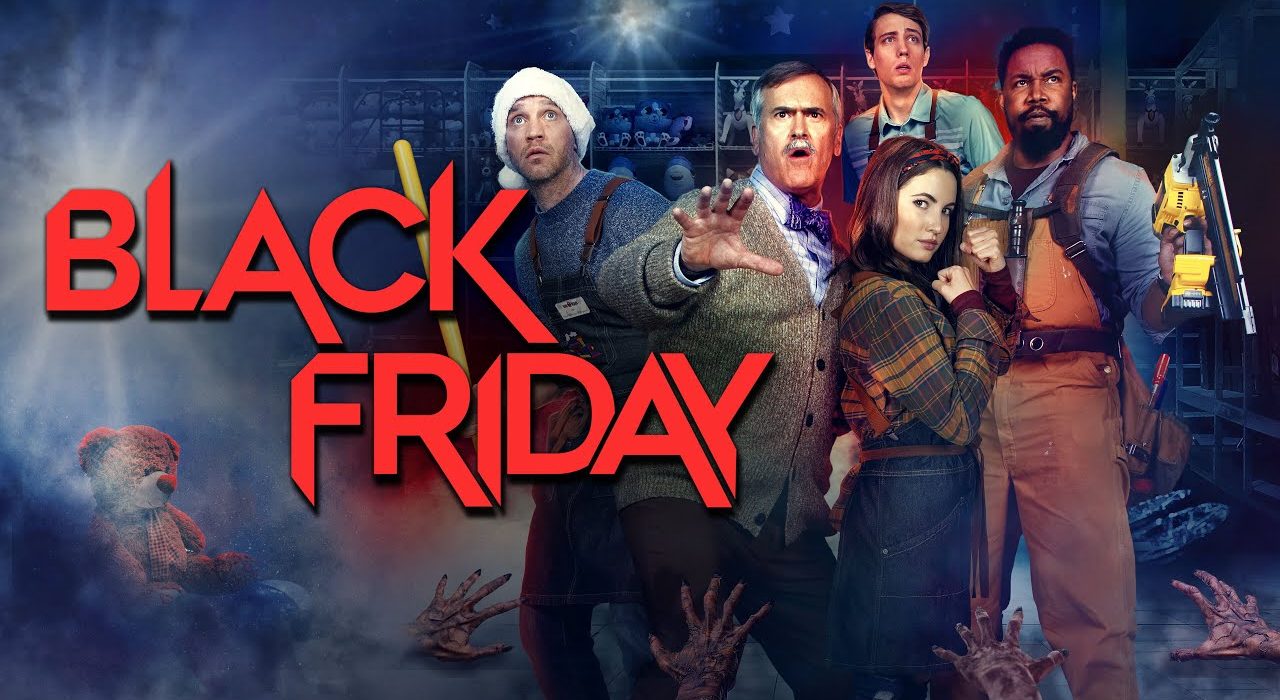 Black Friday is a 2021 American horror comedy film directed by Casey Tebo. It stars Devon Sawa, Ivana Baquero, Ryan Lee, Stephen Peck, Michael Jai White, and Bruce Campbell who serves as the producer.
Trust me, this is the kind of movie horror lovers should watch with like-minded friends.

As monty prepares the store for its Black Friday sale, a parasitic organism attacks All-Mart employee Monty. Monty becomes a monster and attacks two of his coworkers.

Lyla and Gracie Bates are dropped off by their father for dinner with their mother and her new husband Grant. Ken then drives to We Love Toys late shift with his coworker Chris Godecki. While anxious customers wait outside, Ken and Chris prepare to open the store for Black Friday with coworkers Marnie, Brian, Archie, Ruth, Emmett, Anita, and Bircher. While smoking a cigarette, Bircher inadvertently locks himself out of the building. A rabid shopper, possessed by a parasite, mauls Bircher, turning him into a creature as well.

The store manager instructs his workers to open the doors. As the parasitic mutation spreads, shoppers become increasingly violent. As the shoppers are attacked and forced to fight back, everyone notices that they are transforming into murderous creatures. Emmett was infected with a parasite, which caused him to release a tentacle that killed Anita. Emmett transformed into a strange creature before fleeing

Archie leads Chris and Brian through a mutant horde to close an exit door before more shoppers get inside, while Ruth hides in the office. In the bathroom, Jonathan and Ken fight a creature. When Marnie sneaks into Santa\’s Village, she notices that the transformed shoppers are being absorbed into a growing sac.

Ken and his colleagues reassemble on the store floor Immediately they secured the exit door. A police officer who was also possessed by one of the creatures was speeding with his car and ran over Ruth.

The storeroom was barricaded by Ken, Marnie, Chris, Brian, and Jonathan. The coworkers bond over sliced turkey meat while discussing their various tenures at the store. When Ken and Chris argue about their disappointing lives, and Marnie criticizes Ken for not having a real romance with her, the group discussion becomes tense. The storeroom is breached by a mutant. During the commotion and Ken was bitten….